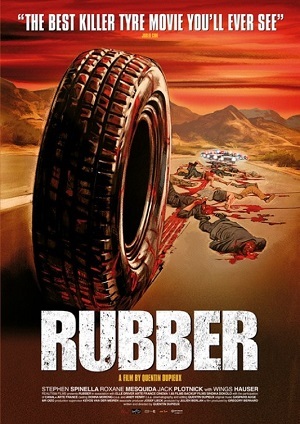 "This movie... is an homage to the no reason."
— The Sheriff
Advertisement:

Rubber is a 2010 horror-comedy by Quentin Dupieux about an abandoned car tire named Robert who comes to life for no reason and roams the desert. After spending some time rolling about and crushing insects, Robert discovers he has powerful telekinetic abilities that he uses to annihilate crows, rabbits, and eventually human beings. All the while, a group of spectators watch the events through binoculars as if viewing a film.