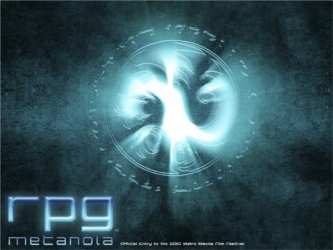 RPG Metanoia is a computer-animated film released in 2010, the first to come out from the Philippines.

Nico is an avid player of the incredibly popular MMORPG Metanoia, where he plays as the wandering vagabond Zero. Unfortunately, that's the only thing he does well, but he doesn't let that stop him from enjoying the game with his friends; that is, until he's forced to realize just how much he's missing out on life in the real world. Worse yet, a malignant virus begins to spread around Metanoia, and Nico may be the only one capable of stopping it...

Roughly four to five years in the making, the film was surprisingly good, and showed at the 2010 Manila film festival. Any Pinoy fan of animation should definitely give it a watch.

Not to be confused with the webcomic, Metanoia.