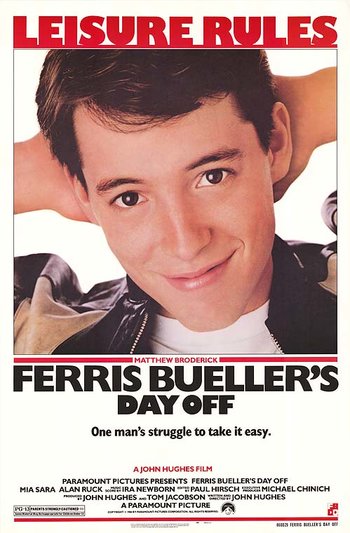 "Life moves pretty fast. If you don't stop and look around once in a while, you could miss it."
— Ferris Bueller

Ferris Bueller's Day Off is a 1986 teen comedy movie written and directed by the legendary John Hughes, and produced and distributed by Paramount. It's considered one of the most influential films of The '80s.

The film follows Ferris Bueller (Matthew Broderick), a high school senior in suburban Chicago, who pretends to be sick and skips school one beautiful spring day. He's able to convince his neurotic best friend Cameron (Alan Ruck) and his carefree girlfriend Sloane (Mia Sara) to come along with him. The three of them "borrow" Cameron's father's prized sports car, heading into the city to spend one more day together before graduation. Meanwhile, Ferris's resentful sister Jeannie (Jennifer Grey) and Dean of Students Ed Rooney (Jeffrey Jones) are both hot on his trail, ready to prove that he's skipping school.

In 1990, a TV series based on the film began to air on NBC (which can now be viewed in its entirety

on YouTube), with Charlie Schlatter replacing Matthew in the title role. Due to poor ratings, it was cancelled during its first season. Dueling show Parker Lewis Can't Lose was its Spiritual Successor (and some say was the real TV adaptation).

This film provides examples of...? Anyone? Anyone?

After the credits are finished, Ferris Bueller tells the audience to go home.

Example of:
That's All, Folks!

After the credits are finished, Ferris Bueller tells the audience to go home.