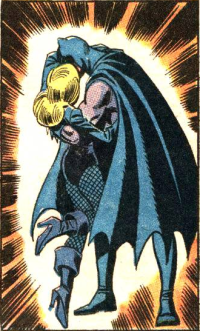 Woo! Look at that girl showing some boot!
"When kissed for the first time, a girl should close her eyes. The second time, she should give an ecstatic back kick, clutching her sweetheart by his coat lapels."
— "An Outline of Motion Picture Etiquette", October 1923

Traditionally, when a woman and a man kiss, the woman tends to lift her leg to show just how hot and heavy it's getting or to demonstrate how much she trusts the man to hold her up.

A somewhat Discredited Trope nowadays, and mostly crops up in parody (though the alert viewer will still sometimes see it played straight, mainly in romantic comedies), as often a man will do this to emphasize his effeminate side, or both people will do it at once. The Trope Namer is the film version of The Princess Diaries.

Though the trope originated earlier, one of The Hays Code's dumber demands required that women, in love scenes, at all times have "at least one foot on the floor" (in other words, no love scenes in bed). It may even be an example of Getting Crap Past the Radar, suggesting as it does that Something Else Also Rises. However, this euphemistic meaning has become mostly forgotten over time, to the point where it can be used without a single raised eyebrow in children's programming, or conversely, seen in pornographic movies, where the need for euphemism is lessened, to say the least.

According to some commentary on the topic (including several actresses from The Golden Age of Hollywood), this trope was/is also intended as a way for starlets to draw attention to their shapely legs. This is borne out by numerous posed "cheesecake" photographs from the 1930's through The '60s where the model is striking a Foot Popping-style pose without actually kissing anyone (generally she's the only one in the picture). Many old hosiery advertisements (stockings and pantyhose) also used the trope in this way, to showcase their wares by calling attention to the legs wearing them.

Not to be confused with your Foot Popping off. For that, see Agony of the Feet. See also Stock Kisses.