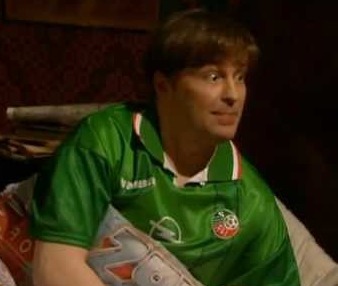 Don't you sleep with your favourite player on your back?
Advertisement:

With a Limited Wardrobe in many media universes, characters wear unique clothing to stand out to the audience. In the case of this character, why would they consider wearing casual clothes like everyone else when you could wear a sports jersey?

This style can be worn by passionate sports fanatics of either a popular team, or a team that they play on themselves; the Jerk Jock might sometimes wear his jersey as a Custom Uniform at school, and in some cases if a character used to play sports in school, wearing their old school jersey may be a sign that they are holding on to past glories, or that their whole identity is tied to their time as a varsity athlete.

In Japanese media, people wear sportswear-like clothing as loungewear that they nickname a "jersey", which has very negative connotations, implying that said character is lazy. It's sometimes the wearer's intention to invoke this for Obfuscating Stupidity in case they do dangerous activities, such as fighting villains.

See also School Uniforms Are the New Black, which is arguably the same type of trope, but with school uniforms instead.