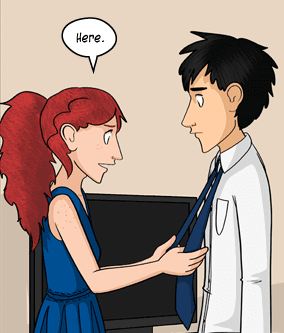 It's standard protocol for men to wear either a necktie or bow tie when dressed up formally. But in many cases, the guy just can't do it. Often, if there's a female companion, she will end up doing it for him, although he will not always be happy about it. This is also sometimes used as a form of Ship Tease due to the necessary proximity required, and may or may not result in a Necktie Leash.

Often Truth in Television, since guys these days have the option of clip-on ties or just don't dress up often enough to get used to it, or both.

Another common form is a mother tying her son's tie. Usually accompanied by comments about how handsome he looks, or how grown up he's become.

If a character manages to get their tie but does it incorrectly, then it may be a Wardrobe Flaw of Characterization.