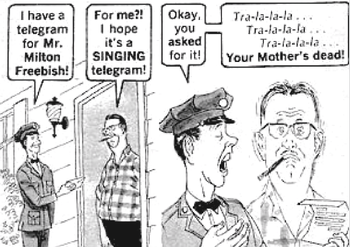 "Duh duh, duh duh duh duh! I. Am. Your singing telegram!" [BANG]
— The Singing Telegram (before she is shot by the murderer), Clue
Advertisement:

Want to send somebody a message in a humorous way and/or troll them doing so? Want to deliver bad news in a cheery way? Want a big romantic gesture for your significant other? There's a simple solution. Have somebody show up to their home, comically singing it for them. May involve one singer or an ensemble. The singer(s) may also wear a ridiculous costume. The singers will run the gamut from being extremely cheerful to being more cynical and fed up with their job.

Since telegrams have been long obsolete, these are never used for legitimate communications. When this trope does appear, it will be for a novelty message and Played for Laughs. Usually, the telegram will arrive at the most awkward or inopportune moment. Expect a large crowd of people to witness it. If bad news is being delivered, the cheery song will be juxtaposed with the depressing nature of the news. This will undoubtedly make the bad news worse. If this is done as a romantic gesture, the love interest will likely think it's too much. Often the singing telegram will be a barbershop quartet.

A singing nurse comes to encourage Ferris but gets Jeannie instead.

A singing nurse comes to encourage Ferris but gets Jeannie instead.