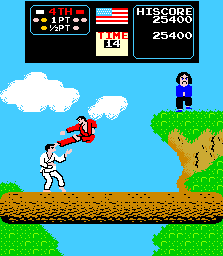 What's a "fatality"?
BEGIN!note  Or "HAJIME!" in the Japanese version.
Advertisement:

Karate Champ ("Karate Dou" in Japan) is one of the earliest examples of the one-on-one fighting game, published by Data East Corporation and originally developed by a company full of former Data East employees known as Technos Japan. The game featured a voice chip for both the sensei to make calls, and for the fighters to Kiai.

Gameplay consists of two fighters (one in a white gi and another in a red gi) using karate moves to score successful hits against each other. There is no Life Meter; a player can only win a round by scoring two "points" against his opponent, with the referee judging whether or not a hit is worth a half-point or a full point.note In other words, it plays more like what you would see at actual karate tournaments...well, ones that don't use kumite rules, anyway. The winning player gets to participate in a minigame, and then face off against progressively harder opponents.

A sequel called "Karate Champ: Player vs. Player" ("Taisen Karate Dou") was later released. While the single player-only first game took place largely in a karate dojo, the second game had a variety different locations, and allowed two players to play against each other.