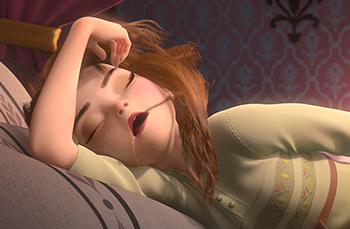 Princess Anna, the picture of sophisticated grace.
If you have a character who is fast asleep, what would be a comical way to display this? Why don't we have the character trickle down saliva from their mouth, as in drooling like a little baby?
Advertisement:

This is the trope where a character drools while sleeping in a noticeable display of comedy. In some cases, drooling can be used to indicate innocence, since, commonly, small children tend to drool while they're asleep. When adults do this, it's supposed to portray them as inelegant and crude, especially with females. Then again, when women do it, it can be considered as cute while male droolers are considered to be very childish.

This can be justified by the fact they are a Heavy Sleeper. There's an indication that whenever a character drools at sleep, it shows that the sleeper is mentally dumb, and/or socially awkward (rarely Book Dumb). This could also happen if they're dreaming about food. Pretty much everyone does this at one point.