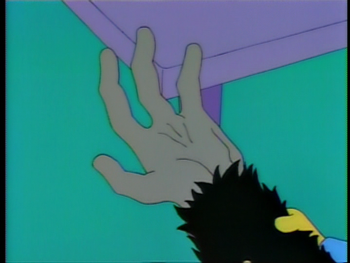 This year's Halloween special comes from candy-induced nightmares: In "Lisa's Dream," Homer's monkey paw souvenir from Morocco makes wishes come true for his family — and misfortune to befall everyone else, in "Bart's Dream," Bart's omnipotence forces everyone in town to be a Stepford Smiler or incur his wrath, and in "Homer's Dream," Mr. Burns builds the perfect plant worker — and uses Homer's brain to make the robot come to life.

This was also the first episode (in production order) to be animated by a company outside AKOM, specifically Anivision. They would go on to be a regular contributor for the series until season 10.

Tropes included in this episode:

Didn't see that one coming.

Didn't see that one coming.