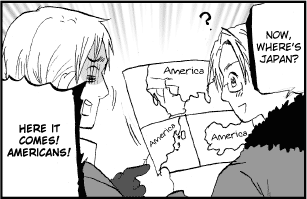 Trade, travel, war, and other interactions between nations and regions is an integral part of human history, from the Silk Road to the Triangle Trade to containerization. In fact, in today's globalized world there is only a small handful of countries that are self-sufficient, i.e. can support their own population with everything they need without needing to trade for it, so geography has always been something that people would (or should) be aware of, simply by virtue of the fact it's A) very difficult not to, and B) just seems a bit rude not getting to know your neighbors. Thus, when TV wants to show that a person is an idiot, they almost inevitably show them making a geographic mistake, such as mistaking a continent for a country, or the inability to find a given location on a map.

This can be done with a character, to demonstrate their status as The Ditz, or with real people as part of a Selective Stupidity feature.

Alternatively, it can be used to depict a character as being a short-sighted nationalist, usually a resident of The United States, particularly by Europeans who frequently use this trope as shorthand for stupid Americans who know nothing of the world beyond the continental forty-eight states. It's not without its merits, though: a variety of studies have found that American students are among the least geographically literate in the world. (And yes: for the record, America is one of those self-sufficient countries, probably not by coincidence.)

In a variation, a character insists on using the old names for countries that have reformed or gained independence, such as Rhodesia

(a former British territory in Southern Africa now known as Zimbabwe), Formosa (Taiwan), or Ceylon (Sri Lanka). In this case, the character is oblivious to the changing political climes, and has no interest in staying current. If he knows the modern names, but refuses to acknowledge them, he's probably a Quintessential British Gentleman who wants to hearken back to the glory days of the empire.

A third possible use is to show a character as being out of touch rather than stupid by using the old names for countries that no longer exist but did exist in their lifetime, like Yugoslavia or the Soviet Union. Unlike the above example, these characters are unlikely to be making a statement and are simply old, or otherwise haven't had any reason to check a map in the past decade. A common side effect for anyone from the Soviet Bloc who Slept Through the Apocalypse of its disintegration.

Of course there are greater and lesser degrees of this trope, and it can be used in subtly different ways. Not knowing the name of the capital of the country a character is currently in almost certainly is showing how the character is genuinely stupid, while being unable to name all of the former Yugoslavian republicsnote Slovenia, Croatia, Bosnia and Herzegovina, Serbia, Montenegro, North Macedonia; Kosovo is an interesting addition, though, as only 97 of the 193 United Nations members recognise its independence

is unlikely to be saying a character is dumb unless its being asked by The Smart Guy to demean a character. However this can backfire as the 'genius' character demands another name—the capital of Belarusnote Minsk—and ends up stumping themselves.

Often a character who isn't characterized as being either The Smart Guy or The Ditz will make understandable but amusing slips along these lines to cement their position in the intellectual hierarchy particularly if they have been being a bit too smart recently. A good example would be thinking Thai people are from Taiwan which is wrong, but not completely stupid either.

Usually a case of In-Universe Factoid Failure when it happens in fiction. Can overlap with Eskimos Aren't Real, if the character refuses to believe that a country actually exists. See also Artistic License – Geography.

Cricket thinks a state capital is the first letter of its name, which is a capital letter.

Cricket thinks a state capital is the first letter of its name, which is a capital letter.