Antarctica is the southernmost continent in the world. It is also the only one that doesn't have any permanent human residents, hence the lack of independent countries in the continent. Other extremes include 'highest' and 'driest'—seriously, it's a desert down there.

There are many claims to the various parts of the continent made by the United Kingdom, France, Norway, Australia, New Zealand, Argentina and Chile. The current "government" of the continent is run by what is known as the Antarctic Treaty which was signed in 1959. The treaty freezes all the territorial claims on the continent while setting it aside as a scientific reserve. It also bans all military activities on the continent, effectively making Antarctica a neutral country of sorts. And yes, the United States did sign this one, although 'reserving' the right to make a claim later if it feels like it. Right now it's just research stations. Still, it's nice to know that not bombing the place was worth the Antarctic Treaty System (there's a bunch now) being in general one of the first arms control treaties of the Cold War.

It is also known as the home of the Emperor Penguins, and also the setting for the film March of the Penguins which documented the lives of the aforementioned penguins.

Another minor issue is the 'ozone hole'. In the mid-1980s, scientists noticed that the ozone layer over the south polar region would get very thin during springtime (for the southern hemisphere). This was traced to some man-made chemicals, usually called 'CFCs', for 'chlorofluorocarbons'. Most people finally figured out that atmospheric ozone is useful, and stopped making these. Fortunately, there seems to be signs that the ozone layer is repairing itself in the absence of CFCs.

So, aside from no precipitation, penguins, research stations, and a lack of ozone, what else is down here? Lately, a few tourists, but not a lot else. There are, however, two civilian settlements on the continent, Villa Las Estrellas

, controlled by Chile and Argentina, respectively.

People had generally figured something was down here for quite a while. Even the ancient Greeks thought so, if only to help balance the rest of the land mass up north. According to The Other Wiki, though, the first recognised discovery was around 1820 by a Russian expedition. And for most of the 19th century, that was about it. Even in 2014, it's a barren waste; imagine trying to live there in 1850.

Though it sounds crazy, there are several sub-glacial lakes scattered around the continent, buried beneath the ice sheet. They are far enough below the surface that water is insulated by the ice above and warmed by geothermal heat below, allowing it to remain in its liquid state. The largest of these lakes, Lake Vostok, has long been an interest of Antarctic explorers. Only in February of 2012, after twenty years of drilling, did a Russian research team finally break through the ice sheet to the surface of the lake.

Maps of the place can't put 'north' at the top, of course, as once you're down there, everything's north. The usual convention is to have the 'top' of the round map be the Prime Meridian. The continent is then 'split' into West (in the Western hemisphere) and East Antarctica. The Western bit has the Antarctic peninsula, that dangly bit on the side that eventually meanders up to South America. Western Antarctica, which contains Graham Land and Marie Byrd Land, isn't all that bad; it houses a narrow strip of balmy Antarctic tundra along its shores, there were several whaling towns before the whole whaling business was shut down by environmental consciousness, and today there are two small settlements, the aforemented Villa las Estrellas and Esperanza Base. Eastern Antarctica, on the other hand, is deadly. A mountain range called the Transantarctic separates them.

As mentioned earlier, some nations claim some chunks of Antarctica. (Oddly, there's still a bit left, from 90 to 150 degrees west longitude. Register now!) Some of these overlap; more specifically, Argentina, Chile, and the United Kingdom each have a bit that has the peninsula. Even Those Wacky Nazis tried getting in on it (20ºE to 10ºW), although not much came out of it.

To keep the record, the claims are the following:

However, these territorial claims are considered invalid by the majority of nations (signatories of the Antarctic Treaty, which include USA, Russia and China). Also, despite Russia being a signatory of the treaty and thus withholding any official claim, Russian nationalistic circles often unofficially claim the entire continent by right of first discovery (it was discovered by a Russian expedition).

The United States military has a base on Antarctica, McMurdo,

which also plays host to civilian scientists and is located on Ross Island. However, the country doesn't claim any territory for itself; the bit with McMurdo on is actually claimed by New Zealand.

Recently, Antarctica was named the most LGBT+-friendly continent on Earth. This most likely has more to do with the inherent nature of Antarctica than anything else: there are no permanent human residents, no corporations or companies based in Antarctica, and no lawmaking bodies either in Antarctica or abroad making laws unfavorable (or, for that matter favorable) towards LGBT+ people. (It also helps that some penguins are known to form same-sex pair bonds, and even raise eggs together.) In 2018, it held its first pride celebration.

See also Mysterious Antarctica for older depictions of Antarctica, and Polar Bears and Penguins for the usual confusion between them, the polar bears and their respective habitats. If you're not careful, you risk to be Reassigned to Antarctica, also. Do not confuse with Green Antarctica. 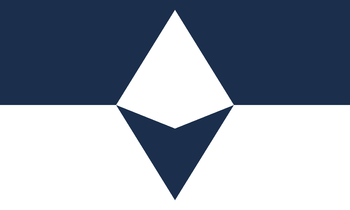 There is no official flag of the continent as the Antarctic Treaty System, the condominium that governs the continent, has yet to formally select one. The flag you see here, called True South, was made by American journalist Evan Townsend at a research station during the austral winter of 2018. Its design's meaning:
Horizontal stripes of navy and white represent the long days and nights at Antarctica's extreme latitude. In the center, a lone white peak erupts from a field of snow and ice, echoing those of the bergs, mountains, and pressure ridges that define the Antarctic horizon. The long shadow it casts forms the unmistakable shape of a compass arrow pointed south, an homage to the continent's legacy of exploration. Together, the two center shapes create a diamond, symbolizing the hope that Antarctica will continue to be a center of peace, discovery, and cooperation for generations to come.
There have also been various proposed designs including this popular one

by British vexillologist Graham Bartram (which is used as the representative emoji for "Flag for Antarctica", 🇦🇶),note Windows and certain other unsupported users will only see an AQ. who used the colors of the flag of the United Nations for his rendition. Nevertheless, True South has quickly seen greater use among those directly involved with the continent than Bartram's design, usurping his design as the "most official" Antarctic flag proposal yet. It has been formally adopted by various National Antarctic Programs, Antarctic nonprofits, and expedition teams, and has been flown at over a dozen research stations across Antarctica along with several other locations on all the other continents. Most recently, on January 1, 2022, the marker stake for the geographic South Pole (i.e. the physical pole at the actual point of 90° south), which is moved every New Year's Day due to ice drift, was changed to use the True South symbol.