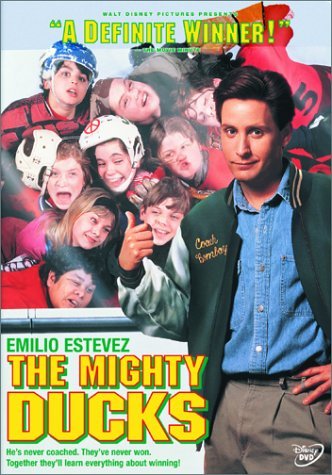 A trilogy of Disney films where a bunch of misfit kids play hockey.

In the first movie (released 1992; called Champions in some countries), Jerkass hot-shot attorney Gordon Bombay (Emilio Estevez) is sentenced to community service after driving while intoxicated. His duty is to coach a rowdy pee-wee hockey team simply called "District 5", a team so down on their luck they don't even have a nickname. As the cold Bombay softens up, his bond with the kids grows, and the team is renamed "The Ducks" after Bombay's employer, the team's new sponsor, Mr. Ducksworth. The Ducks eventually make it to the finals, where they face the Hawks, the team Bombay once played for as a kid; in fact, the coach of the Hawks is still the same man, Jack Reilly. Bombay became disillusioned with the sport when he cost the Hawks the championship with a missed penalty shot. The Ducks win the championship, and Gordon's renewed passion for hockey leads him to try out for the minors.

In the second movie, D2: The Mighty Ducks (released 1994), a year after the championship game, Gordon is playing in the minor leagues, but his dream is shot down by a knee injury (from a cheap shot by a frustrated opponent no less). He is then approached to coach Team USA in the Junior Goodwill Games. Unsurprisingly, Gordon recruits some of his Ducks, along with five other players to represent Team USA. Team USA proves to be a force to be reckoned with, but fame and fortune get to the team, especially Bombay, as they are pummeled in a game against Team Iceland. Soon after Bombay learns that the game is not about celebrity but about having fun, he is able to put the team back on track, and they compete as the Ducks in a re-match against Team Iceland that will decide the championship.

In the third movie, D3: The Mighty Ducks (released 1996), the Ducks are awarded scholarships to the famed Eden Hall Academy, the high school Bombay attended. They also get a new coach in the form of Ted Orion. Orion irritates Captain Charlie Conway (Joshua Jackson) with his stricter coaching methods ("Your little duck tricks won't work anymore!" Orion remarks), switching of the teammates' positions, and by renaming them the Warriors. The team also faces adversity from the varsity team, as the former Ducks were accepted into the Academy instead of their younger siblings. After Conway becomes more accepting of his new coach following some self-reflection and a pep talk by Bombay, Orion also softens up a little, and re-renames the team the Ducks, and the stage is set for a game against the varsity team.

Despite also being by Disney, the eponymous animated series has nothing to do with the films.

The entire trilogy is available on Disney+. There is also Sequel Series to the original trilogy called The Mighty Ducks: Game Changers beginning in 2021. Taking place in the modern day, Estevez reprises his role as Gordon Bombay as he steps in to help a mother (Lauren Graham) start a youth hockey team after her son is cut by the Ducks, now an ultra-competitive, powerhouse focused entirely on winning.