Too Fast to Stop 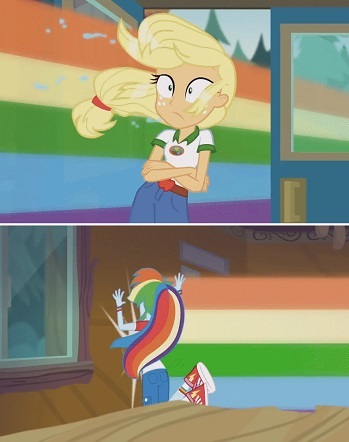 Give her a brake—ahem—break, it's the first time she tries this.
Brother Speeders
Let's
Rehearse
All together
"Good morning, Nurse!"
— Burma-Shave
Advertisement:

Whatever the reason, the results are the same. Spectators wincing in empathy as the speedster crashes or suffers something just as painful.

When a character invokes Too Fast to Stop to cause someone else to crash, it's the Wronski Feint. This is one of the reasons why the Door Judo works. Some Bullfight Bosses can be like this. Compare with Inertia Is a Cruel Mistress and Coming in Hot.

Often a subtrope of Required Secondary Powers; see that trope for other examples of superpowers being trumped by physics. Including the other obvious Super Speed Required Secondary Powers: the ability to react fast enough to control yourself in super speed, the toughness required to keep your feet from turning into bloody stumps at 250+ MPH, skin that can survive the heat from the air friction, etc., etc.

Also see the closely related Watch Out for That Tree!

open/close all folders
Anime & Manga
Comic Books
Comic Strips
Fan Works
Films — Animation
Films — Live-Action
Literature
Live-Action TV
Video Games
Event type, which often put you in much faster cars than your current class on tracks you probably haven't raced on yet. The one in Europe in the Formula One car deserves special mention due to it dropping you in literally the fastest car in the game while you're still in the second-slowest class of cars.
Web Animation
Web Comics
Western Animation
Real Life
Feedback

Thomas and the Jet Engine

Cranky accidentally activates a jet engine coupled to Thomas, sending him on a wild ride.

Thomas and the Jet Engine

Cranky accidentally activates a jet engine coupled to Thomas, sending him on a wild ride.