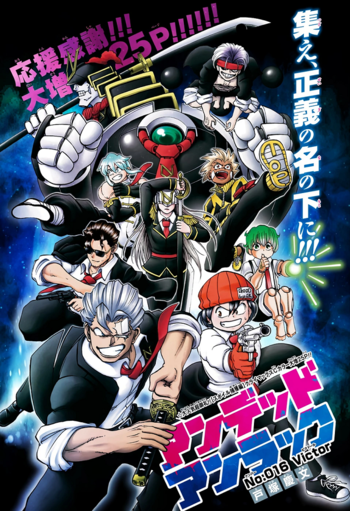 "Undead" Andy. "Unluck" Fuuko Izumo. This is the story of their quest for the greatest death ever.
—Ending naration of Chapter 1
Advertisement:

Undead Unluck (アンデッドアンラック Andeddo Anrakku) is an ongoing manga series written and illustrated by Yoshifumi Tozuka that began serialization in Weekly Shōnen Jump on January 20, 2020. The series is based off a one-off titled Undead + Unluck that was released a year earlier on January 28, 2019.

The story follows an 18-year-old girl named Fuuko Izumo, who has a mysterious superpower that causes anyone she touches to suffer great, and often fatal, misfortune. Having lost her family to her power and become a shut-in most of her life, she decides to end her life after finishing her favorite shojo manga. However, her suicide attempt is interrupted by a man who charges into her knife, falls in front of a train, and yet somehow regenerates completely. "Undead" Andy has the power to never die and recover from any injury, and he thinks that "Unluck" Fuuko might finally be the key to give him a proper death.

The duo soon finds themselves being pursued by the Union, an organization comprised other superpowered individuals, who are dead-set on recapturing Andy and eliminating Fuuko. However, the duo end up joining the organization instead, working with the other "Negators" in the group to complete the quests given to them by Apocalypse, a talking book in which the god of the world lies on the other side of. The Union wishes to build up their power in the hopes of one day defeating this god and freeing the Earth from its control, and Fuuko's power might just be the key to doing so.