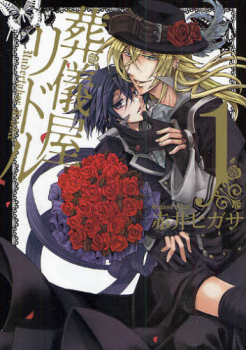 They'll play the funeral march that's just for you.
Hayato Sakura is a normal high school boy, except for one thing: Ghosts are attracted to him. At every step he takes, ghosts (mostly girls) stick to his back, making it impossible for him to have a normal social life. On his 17th birthday, while running away from them, a tall blond man walks up to him and turns the ghosts into butterflies. Amazed by this incredible, beautiful man, who introduces himself as Undertaker Riddle, Hayato asks him to help with his problem and the man agrees with one condition: Hayato must make a contract with him to help him with his work of making funeral ceremonies to evil spirits.
Advertisement:

Undertaker Riddle (Sougiya Riddle) is a supernatural manga by Akai Higasa, which was serialized in Square Enix's Gangan Online magazine from 2009 to 2013.