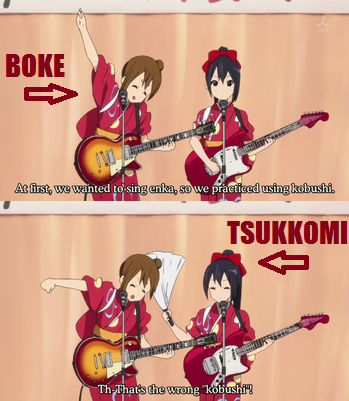 Now just do that with 50 different jokes and you got a Manzai act!note Most Manzai isn't translatable into English because the jokes tend to be heavily based on wordplay. In this case, 'kobushi' is both a form in Enka singing and a Japanese Pop Music group, which as this note proves, prevents the joke from making any sense without outside context.
Aori (Callie): The contestants are: the one who throws out words like curveballs - the "Boke"! And—
Advertisement:
Hotaru (Marie): The one who calmly hits them right back! The "Tsukkomi"~
— Splatoon (Japanese localization)

Called manzai in Japanese, this is the local variation on the ever-popular Straight Man and Wise Guy duo, but with the interactions of the duo making a significant part of the routine. The tsukkomi is the Straight Man of the pair, roughly, while the boke is more or less the Wise Guy — but it's not an exact match. The act usually involves the duo having a conversation on some subject, with the tsukkomi trying to correct the boke's misconceptions; the tsukkomi will sometimes try to have his partner act out a scene with him in order to help make his point. The boke, meanwhile, sets up the gags by getting everything completely wrong, either because he's a moron or because he's being a smartass to the tsukkomi. Every line of conversation repeatedly leads up to the boke saying or doing something unbelievably stupid, at which point the tsukkomi will finally lose his patience and Dope Slap him (usually with a harisen paper fan). A good manzai act needs both halves of the duo to be funny, both for the boke's idiocy and the tsukkomi's short temper.

It is common in Osaka so both members of the comedy duo frequently speak in Kansai-ben. Manzai teams commonly dress in one of two ways: 1) similarly tailored outfits with complementary color schemes; 2) one (usually the boke) wears casual clothes, and the other (usually the tsukkomi) a respectable business suit. Ironically, the most famous manzai duo of all time, Downtown, reversed this — Hitoshi Matsumoto, the boke, always wears a suit and tie (albeit with the tie tucked neatly into his trousers beffiting the boke buffoonishness), and Masatoshi Hamada, the tsukkomi, always wears something casual. (They're also pretty much single-handedly responsible for the equation of Kansai-ben with funny characters.)

When the characters do this purposely to impress, it's not supposed to be very funny and no one will laugh, despite good intentions. When someone is the tsukkomi for an entire cast, they're probably also the Only Sane Man. When someone is a boke for the whole cast, they're probably also a Cloudcuckoolander. Of course, it's frequent in a show with a large cast to have a character that is both the boke to one person and tsukkomi to another.

A very similar routine, the 'White Clown/Red Clown' skit, is pretty popular in Russian live comedy shows, with the Red being the boke and White being the tsukkomi.

Can be Those Two Guys. Compare Right Way/Wrong Way Pair, Smart Jerk and Nice Moron, and Enraged by Idiocy.