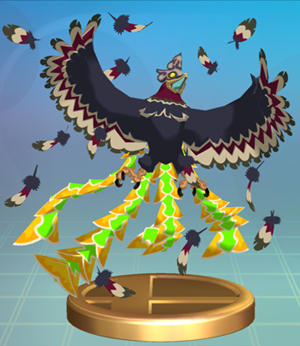 You know it's bad when even the trophy is molting.
Mina: Why is it bat wings? Aren't bird wings more efficient?
Akira: Do you know how many feathers come off every time they flap their wings? I've calculated that it takes only minutes before all feathers come off!
— "Magical Mina #41

In fiction, any feathered creature, from a sparrow or crow to gryphon or winged angel, always seems to be molting loose feathers, such that whenever one takes flight, it leaves behind a trail (or shower) of loose feathers.

Molting is a natural process in real life birds — those iconic flight feathers do occasionally need to be shed and regrown, but it only happens in seasonal intervals, and large birds only shed one or two feathers at a time (much like people and other mammals shed a few hairs here and there). Only extreme stress causes a bird or mammal to shed rapidly. Some species of smaller birds and waterfowl (ducks, say) who do shed all of their flight feathers at once are in fact left unable to fly until their new ones grow back in. If a bird were to shed the same quantity of feathers as depicted in fiction, it would probably be a sign of parasites or disease, and either way the bird would be grounded.

As such, this trope occurs mainly for its value as a visual spectacle (and, in video games, to show off the system's particle effects). See also Feather Motif for when feathers are used as a recurring metaphor or symbol in a work.

Also compare Feather Flechettes, which is what occurs if one weaponizes all those loose feathers.