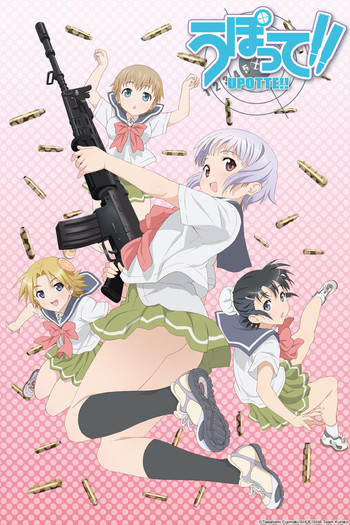 A Slice of Life show following the lives of Funco and her friends Eru, Ichiroku, and Shigu. At Seishou Academy, the four girls aim to do their best and shoot for their goals. Literally. With live ammo.

...Yeah. The students at Seishou Academy are all Anthropomorphic Personifications of various military firearms, and the show features Slice of Life antics alongside information about the weapons depicted.

The franchise consists of the manga (the regular series and the Upotte Nano spin-off) with an ONA (Original Net Adaptation) and OVA so far. Received a simulcast on Crunchyroll. The animated series is licensed in North America by Sentai Filmworks and released on Blu-Ray and DVD on March 18th, 2014. The Anime Network

is streaming the English dub.

This series has these tropes in bullet point: