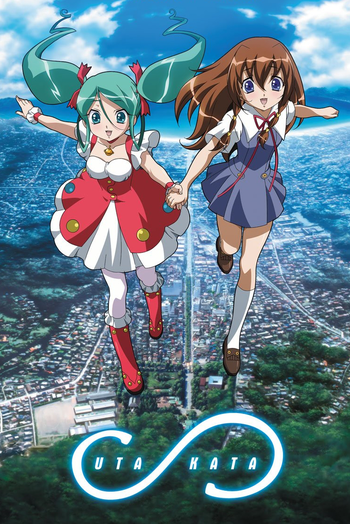 Ichika Tachibana is an ordinary 14 year old girl with two older friends who gifted her a yin-yang charm that she keeps on her mobile phone. Then one summer evening she finds her mobile phone is somehow on the other side of a mysterious mirror at school. Peering into the mirror, she sees another girl looking back at her, who promptly picks up the phone and emerges from the glass. This girl, Manatsu, claims to be a part of her, and Ichika's parents are strangely open to having her stay in the house. Manatsu promises to take care of Ichika for the summer holiday, but asks that she do her "homework" for her.
Advertisement:

This means using the yin-yang charm to summon Djinn, elemental spirits whose powers can be used by Ichika for various ends. From now on she will summon a different Djinn each episode, accompanied by a Transformation Sequence that, unusually for the genre, puts her in a different costume each time. This thrills her at first, but the more she uses this power the more she finds that it comes with a heavy cost, and she starts seeing herself and the world in an increasingly negative light. Ichika also remembers some foreboding dreams about Manatsu that she had long ago, but she can't recall how they ended. Meanwhile a mysterious woman called Saya watches over her.

Uta~Kata ("Poem Fragment") starts out as an ordinary Magical Girl show, but gradually shifts to a darker tone. The 12 episode anime, broadcast in 2004, was given an OVA episode in the DVD release that brings some more closure than the finale did. The character designs and animation style are hallmarks of gímik, a creative threesome consisting of director Keiji Gotoh, character designer Megumi Kadonosono, and screenwriter Hidefumi Kimura, who are perhaps better known for their work on Kiddy Grade and Kiddy GiRL-AND. In August 2010, six years after its original Japanese broadcast, Section 23 Films announced a North American release of the series.