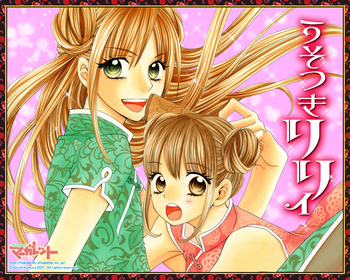 Hinata Saotome thinks her wildest dreams came true when she is asked out by the gorgeous En Shinohara. She would soon wish that it remained a dream, as she realizes that En is the cross-dressing boy at their school. He harbors a hatred for men, so much that he'd punch out his own reflection if he ever saw it, and his cross-dressing is his way of combating that. Hinata goes out with him anyway, and Hilarity Ensues as they try to make their relationship work.

Usotsuki Lily, also known as Liar Lily, is a romantic comedy manga by Ayumi Komura that was serialized in Margaret from 2009 to 2014, and was compiled into 17 Volumes.