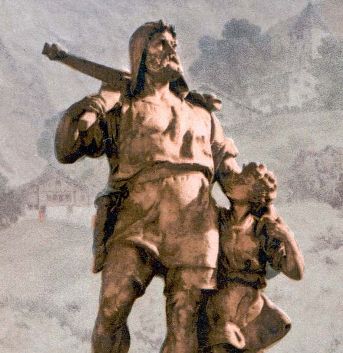 Wilhelm (or William) Tell is a legendary Swiss folk hero (of questionable historicity), said to have lived in the late 13th and early 14th centuries. According to the story, his resistance to the Habsburg overlords of what is now central Switzerland served as the basis for a wider rebellion and the foundation of the Swiss Confederation.

The legend is fairly simple: In 1307, the Habsburg Duke of Austria has sent the reeve Albrecht Gessler to the canton of Uri

(by the shores of Lake Lucerne), in order to strengthen his control over the region. Gessler is a ruthless authoritarian and quickly makes himself unpopular. He has his hat put up on a pole in the town of Altdorf, and decrees that all passers-by must bow before it.

One day, an alpine shepherd and expert crossbowman called Willhelm Tell comes to town with his son Walter and refuses to pay tribute to the hat. Gessler is furious and has him arrested. Hearing about Tell's marksmanship skills, he agrees to spare him and his son from the death penalty on one condition: That Tell must shoot an apple from his son's head in the town square. Tell, not having much choice, takes two bolts from his quiver and loads one before taking the shot. He succeeds, splitting the apple while leaving Walter unharmed. When Gessler askes him what the other bolt was for, Tell replies that if he had hit his son, the other bolt would have been for Gessler.

Upon hearing this, Gessler upholds his end of the bargain by not having Tell executed, but still has him bound and taken to prison for his treachery. While the party is crossing Lake Lucerne in a flimsy boat, however, a powerful storm comes up and the soldiers unbind Tell and ask him to steer for them, fearing that they will capsize. After saving Gessler and his men from drowning, Tell seizes the opportunity to escape by leaping to shore. Soon afterwards, while Gessler is travelling by land through a narrow gulley, Tell assassinates him (with his trusty crossbow, of course).

Friedrich Schiller wrote a play about him, which is Quote Overdosed (well, if you speak German, at least), and codified the version of the story best known to modern audiences. Gioachino Rossini made the legend into a four-act opera, drawing largely on Schiller's play; the most famous part of the opera is its overture, best known for its use as the theme for The Lone Ranger.