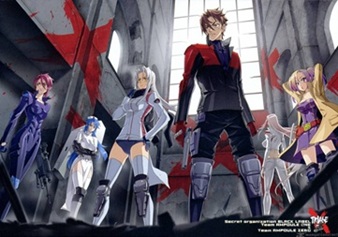 Triage X is an action Manga series written and illustrated by Shouji Sato (who's also the artist of Highschool of the Dead). Drawn in his typical style, it depicts the actions of a hospital-themed vigilante team stationed at the Mochizuki General Hospital. Features motorcycles, gunplay, Stuff Blowing Up, and fanservice.

Though it has the Mochizuki team as protagonists, it mainly centers on Arashi Mikami, a teenaged vigilante assassin who received an organ transplant after Dr. Mochizuki's son Ryuu was declared brain-dead when a terrorist attack took place at the International Medical Center in Tobioka City. Even though he lost the things important to him, Arashi is prepared to make the best of it by combating crime in the city.

The manga began serialization in Monthly Dragon Age in 2009, and it received an anime adaptation that aired in April 2015 and covers the first 9 volumes. The anime was localized by Sentai Filmworks in North America; the manga is being localized by Yen Press. It's announced that it'll end after 21 volumes

, although there's news to suggest that the story can still continue even after the 21st volume

.note The story has continued as of Volume 23.