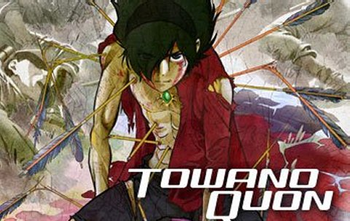 Towa no Quon is a six-part animated film directed by the late Umanosuke Iida (with Takeshi Mori, of Vandread fame, acting as "collaborative director" in his place) and produced by Studio BONES.

In a futuristic Tokyo, unique human beings are developing strange abilities and are being hunted by a mysterious organization known as Custos. Known as "Attractors", these humans join forces to defend themselves and create a place where they can live in peace, led by a boy named Quon, an idealist who is determined to save all the Attractors he can.

Sentai Filmworks announced during the 2011 Anime Weekend Atlanta that they have licensed the film series and is currently broadcasting it on their Anime Network subtitled on a biweekly basis starting on Thursday, October 13th. A DVD and Blu-Ray release is expected to follow shortly afterwards.

The OVA also has a one-volume prequel manga, Towa no Quon: Episode at Daybreak, that takes place shortly before the start of the OVA.

Tropes found in Towa no Quon: