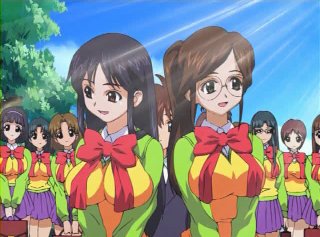 Zashono Academy: Where 100% of the girls who graduate float without holding their breath.
"Well, there's a surprise. Even more absurdly huge tits."
— Nanael, Queen's Blade
Advertisement:

A setting in which practically every known female character, excluding the occasional Token Pettanko, is unquestionably big-breasted. Whether they be skinny, average, muscular or chubby, female characters have larger-than-average breasts seemingly by default. This is especially evident when there is a wide range of body types, but they all have one... excuse us, two common features.

This can be a software limitation in Video Games where everyone looks familiar because they all use the same model. If one female NPC has large breasts, all female NPCs have them. If it's a 3D game on a 5th-generation console, it may even be a technical limitation, as those consoles tend to go for all or nothing, due to polygon count. Also particularly common in MMORPGs.

This is not just about a cast with a lot of large-breasted women. This is where roughly 90% of the female cast shown has large knockers, making it seem like this body type is the norm rather than a slightly uncommon occurrence (as in Real Life).

Usually occurs as a result of Author Appeal. This can be a major source of A-Cup Angst for the 10% that are not well-endowed. Rarely combined with D-Cup Distress. May overlap with World of Action Girls. Its Spear Counterpart is World of Muscle Men.

A Sister Trope to Most Common Superpower. See also Only One Female Mold.