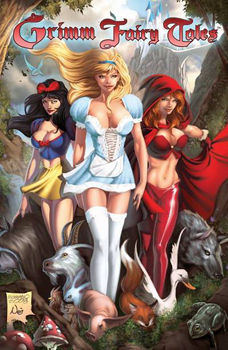 The series has led to a number of spin-offs, including The Wonderland Trilogy, Neverland and Oz, which drop the Frame story format and focus on one of the five worlds that make up the series 'verse, The Piper; a four-issue-long treatment of the Pied Piper, and Inferno, which continues the story of the Dante sisters. Besides connections in their own continuity, the series has also crossed over with 1001 Arabian Nights: The Adventures of Sinbad, The Dream Eater Saga Crisis Crossover and the Unleashed Crisis Crossover.

There was also an animated series in the works featuring the voices of Lena Headey, Briana Evigan, Chris Hardwick and Robert Forster. Here's a preview of the pilot.

Grimm Fairy Tales spin-offs with their own entries: