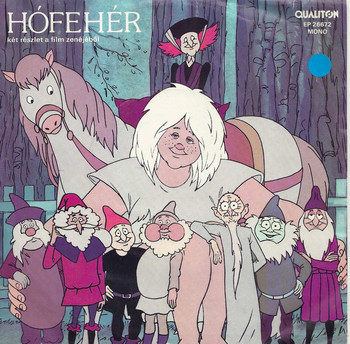 Snow White with a dark twist

Hófehér is a Hungarian animated film created by Pannonia Film Studio in 1983. It's a bizarre, dark, satirical film based on the tale of Snow White, taking some cues from the Disney adaptation.

Once upon a time in a kingdom far away, a Queen wishes for a child with "hair white like snow and eyes red like blood". But before she could give birth, she gets poisoned by her evil handmaiden Arrogancia, who then proceeds to marry and then murder the senile King too. On Arrogancia's request (to create a cover story that the Queen died in childbirth), the castle's Mad Scientist creates an Artificial Human to become the royal heir. The child, named Hófehér (Snow White) due to her white hair, is abandoned Arrogancia and gets raised by the castle's blacksmith.

Hófehér grows into a large, incredibly strong, but kind-hearted woman. But when the near-sighted prince of the neighboring kingdom accidentally proposes to her, the jealous Arrogancia hires a huntsman to take Hófehér to the forest and kill her. The strong girl escapes from the huntsman and meets seven xenophobic, misogynistic dwarfs who reluctantly accept her to their home. The clumsy Hófehér wrecks the dwarfs' house, and the dwarfs ask Arrogancia to help them get rid of her.

The film is noted for its bizarre, adult-oriented humor - which is much funnier if you actually lived in the Communist Bloc. It is considered a Cult Classic in Hungary.

The film has examples of the following tropes: