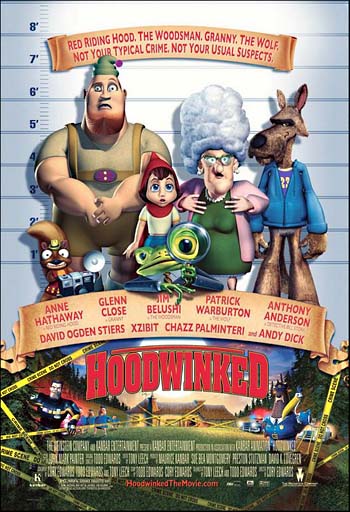 OK, girl in the red hood, please step forward and repeat the line you've been given.
"Let's just say that if a tree falls in the forest you'll get three stories: yours, mine, and the tree's."
— Inspector Nicky Flippers

Hoodwinked is a CG animated movie released in 2005 that parodies the Little Red Riding Hood fairy tale. Possibly inspired by Shrek, the movie is an Urban Fantasy retelling, using a "Rashomon"-Style interrogation set-up to tell the story, while reinterpreting all of the tale's characters.

The movie starts In Medias Res, as the police detain everybody at Granny's house — the Wolf, the Woodsman, Red Puckett, and Granny — and interrogate them separately to find out what happened. Each then narrates the events of their day that led up to their arrival at Granny's place.

A sequel titled Hoodwinked Too! Hood vs. Evil, in which the Wolf and Red team up to rescue Hansel and Gretel, was released in April 2011 after several years in Development Hell. The animation was noticeably altered, and we could understand Twitchy, it got a They Changed It, Now It Sucks! reaction from viewers.

This movie contain examples of:

open/close all folders
Tropes A
Tropes B
Tropes C