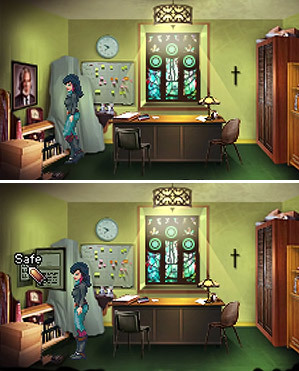 "That's the sort of decoration that screams 'There's a safe behind me.'"
— Lt. Wilcox, The Flying Cloud
Advertisement:

To be fair, a painting is probably the easiest object to hide a safe behind; on the other hand, behind a painting is consequently the most obvious place to look for a safe. People rarely seem to consider installing safes behind other common objects hanging on walls, such as mirrors or tapestries.

Sometimes the painting will suggest the presence of the safe, the nature of the valuables or perhaps even be a clue to the safe's code.

This is ridiculously common in Interactive Fiction and Point And Click Games.

The Belcher kids discover a hidden door on a painted wall to look like a path.

The Belcher kids discover a hidden door on a painted wall to look like a path.