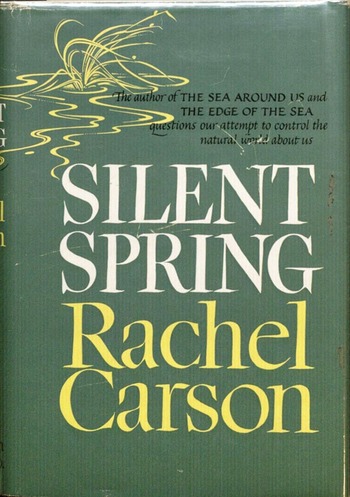 The cover of the original edition.
"The 'control of nature' is a phrase conceived in arrogance, born of the Neanderthal age of biology and philosphy, when it was supposed that nature exists for the convenience of man. The concepts and practices of applied entomology for the most part date from that Stone Age of science. It is our alarming misfortune that so primitive a science has armed itself with the most modern and terrible weapons, and that in turning them against the insects it has also turned them against the earth."
— Rachel Carson, the book's closing statement
Advertisement:

. It raises concerns about the rise and widespread use of chemical pesticides and would become a foundational text of the American environmentalist movement, leading among other things to the US banning DDT.

The book begins with a short parable called "A Fable for Tomorrow" about an idyllic American town whose plants, animals, and residents suddenly begin to sicken and die, with no discernible cause—revealed to be the consequence of powdered herbicides being dispersed by aircraft. The story is a warning: Carson states at the end of the chapter that, while no such extreme example had occurred yet, every individual element had in one place or another.

The rest of the book describes these events, detailing the proven effects of commonly used chemicals on every level of the environment—from estuaries to forests to humans—and compiling numerous cases from around the country where ecosystems had already been seriously damaged. Highlights include the extinction of Dutch elms; the massive die-off of robins in the Midwest when chemicals got into the worms that the robins ate; the tendency for pesticides to kill off natural predators to the pests they target, exacerbating the problem; the use of flower-killing herbicides to clear the view on roads when all that was needed was to cut down trees and scrub; the ease of coming into contact with (and dying of) dangerous chemicals by accident; and the unknown effects of a multitude of compounds mingling and creating new, even more dangerous poisons.

The later chapters discuss alternatives to chemical control such as the introduction of natural predators, male sterilization, and generally more sustainable farming practices, calling for the public to inform themselves and protest the poorly understood dangers they were being exposed to.

Although not a work of fiction, this book provides examples of: