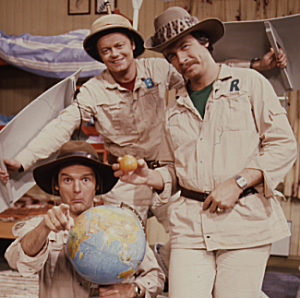 From left to right: Gaus, Brumund and Roms Dal
Brødrene Dal (the Dal Brothers) is a trio of fictional explorers featured in a series of Norwegian television shows and a feature-length film. Written and portrayed by Lars Mjøen, Knut Lystad and Trond Kirkvaag (known collectively as KLM - the Norwegian equivalent to Monty Python), the three brothers are Gaus (Mjøen), the straight-faced, natural leader of the group; Roms (Lystad), the most easy-going brother, sometimes to the point of naivety; and Brumund (Kirkvaag), the most quirky member, identified by his distinctive propeller hat.
Advertisement:

Apart from the three brothers, the only recurring main character is the Narrator, played by comedian Tom Mathisen, who follows them around (in the early series, just as a voiceover, but in later series he began making more physical appearances) and chronicles their adventures, tells the audience to keep following the series and at the end of each episode makes increasingly absurd predictions about what will happen next time.

Their escapades have them encounter several hurricanes of puns, sight gags and clever, if not exactly easily translatable, wordplay.

In addition, the brothers have appeared in numerous smaller projects like commercials, a couple of audio productions, and even a comic album loosely based on the fourth series. They have also made cameo appearances in a number of other Norwegian TV productions, several of them being other KLM series.