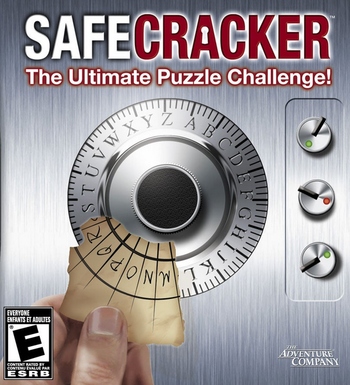 Safecracker is the title of two point and click puzzle games. The first was released in 1997 for PC, published by Dreamcatcher Entertainment and developed by Swedish software developers DayDream Software, who later developed a harder, but similar game, Traitor's Gate.
Advertisement:

A Spiritual Successor was released under the same name in 2006 by The Adventure Company and Kheops Studio, with the tagline, "The Ultimate Puzzle Adventure". Unlike the first game, it was also released for Nintendo DS and Wii.

In the first game, you are assigned by Jerry Crabb, the eccentric President and CEO of renowned safe manufacturing firm, Crabb & Sons, to break into their corporate headquarters after hours, crack every safe in the place, and use the items retrieved from those safes to unlock the final, most complicated safe which contains your job contract.

The second puts you in the shoes of an expert safecracker, hired to find the will of Duncan W. Adams, a recently deceased oil conglomerate CEO who had a serious passion for designing safes just as strange as Crabb & Sons'.

Not to be confused with the pinball game of the same name.

The 1997 game contains examples of:

The 2006 successor contains examples of: