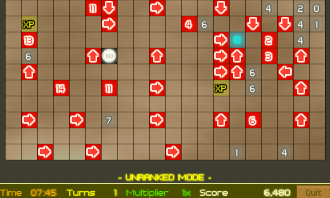 Most of the fun comes from figuring out how to play the game. This player didn't.
Advertisement:

A subgenre of Puzzle Games, these games or minigames are based on Minesweeper. They typically involve a tile-based board where all tiles are initially hidden. You click on a tile to reveal its contents and use the clue to decide what tile to click or not click on next. This is done until a goal of some kind is achieved, usually uncovering all tiles having/not having something or reaching a goal. The player can also fail by running out of time, turns, or clicking on something they're not supposed to. There have been games that adopted a model similar to the Trope Maker but came out before it or didn't employ clicking as the main mechanic, though.