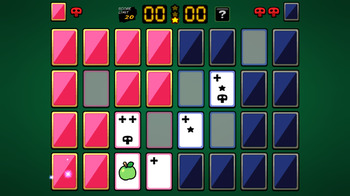 A game of PsyCard currently in progress
Advertisement:

PsyCard is a Minesweeper-like game set in a "cozy cyberpunk dystopia" created by Ludosity. You are one of four friends freeloading it up on your rich cyborg friend's couch. She wants you out... once in a while, you can still sleep there and since your rather enamored with this PsyCard game on TV, maybe you can do that as a hobby. Using your awesome psychic powers (which you somehow have and are, apparently, ONLY useful for playing PsyCard) you'll climb through the ranks, playing from tourney to tourney, in the hope that you'll make it to the Grand Tournament, because... you really have nothing better to do.

As mentioned above: the game is very similar to Minesweeper. You have a grid of different colored cards. (one for you and one for your opponent) You each take turns flipping card trying to collect three fruit cards while also collecting stars (which fill your Mana Meter and give you bonus points) and trying to avoid red skulls (which make you insta-lose the round). Most cards you pull will have plus-signs, small stars, and small, black skulls. These mean that one of those cards is in the general vicinity, which is where the MS similarities come in. Collect three fruit to win a round, reach the score limit first to win the game.

The game is currently available on both iOS