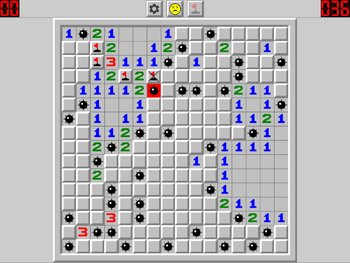 You've been sweeped.
"Each time you dig, you will find a number. That number will tell you exactly how many mines are adjacent to your square..."
— Minesweeper The Movie Trailer

Minesweeper is a nice little puzzle game packed with every version of Microsoft Windows up to Windows 7. When you start the game, first you must select the difficulty: beginner, intermediate or expert. The levels will affect the size of the board (9×9, 16×16, 16×30) and the number of mines (10, 40, 99) respectively. The level is randomly generated. By left-clicking any square on the grid, you will either open a new area, detonate a mine or find a number. That number tells you the number of adjacent mines. Right-clicking places flags where you think there's a mine. Middle-clicking a number with a matching number of flags adjacent to it uncovers all squares adjacent to it that are not flagged, which will set off a mine if even one flag is in the wrong square.

Minesweeper is known to have quite a few little strategies:

The world record for Expert difficulty is currently 27.53 seconds

, set by Ze-En Ju, who broke a record almost as old as he is.note The previous holder's record of 31.133 seconds was eleven years old at the time it was broken. Ze-En Ju was twelve. He broke it again a month later.

Examples of tropes used in Minesweeper: