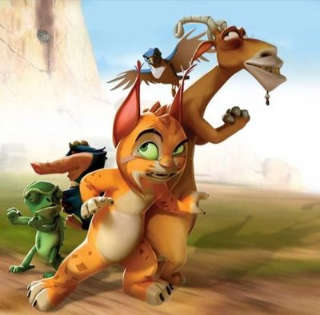 The main cast... well, most of it.
Advertisement:

The Missing Lynx, or El Lince Perdido, is a Spanish/British computer animated film released in 2008. It was directed by Manuel Sicilia and ex-Disney animator Raul Garcia, who also largely wrote the script.

The story takes place almost entirely in Andalusia. Felix, one of the Iberian lynxes currently facing extinction, is clumsy and unlucky enough to be taken to animal care center about once a week. He grew accustomed to this life and is not afraid of humans at all. But his easy life gets interrupted when a hunter named Newmann with a group of mercenaries kidnaps all the animals from the center, including Felix's Love Interest, a female lynx named Lincesa. Felix, along with his three friends, Gus (a chameleon), Beeea (a mountain goat) and Astarté (a Peregrine falcon), manage to escape. Together, they must save the captured animals, as well as find out who is behind all this.

From the very beginning of the project, Manuel, Raúl and co-writer José Enrique Machuca focused their efforts on the development of the script.

The story was given the highest priority, and thus the animation had to be given less attention. So, animal and human character models, while displaying every possible kind of emotion through flawlessly done facial expressions and body language (this is Disney quality we are dealing with), had to be simplified. The most noticeable element of said simplification in the final product is the omission of realistic hair and fur. On the other hand, the 3D environments were created with great care,

and the lighting is fantastic.

It should be noted, that while being fairly cartoony, the film has a surprising number of Shown Their Work moments, such as the film's locations built to resemble those in real-life. Also, the fact Felix is friends with animals who could easily be his prey will not be THAT stunning to someone who knows about Iberian lynxes' hunting preferences.

Spain saw a big-scale theatrical release, while elsewhere the screenings were short and limited, and generally the film was released straight-to-DVD (or even Netflix) everywhere else.

The same studio went on to make Justin and the Knights of Valour.

The Missing Lynx provides examples of: