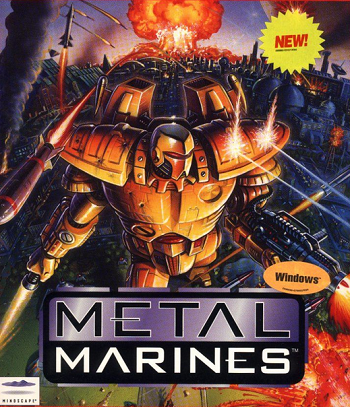 A relatively obscure Real-Time Strategy game developed by Namco and released in 1993 for Windows 3.1 PC and the Super NES, originally released in Japan under the name Militia.
Advertisement:

The story takes place over 100 years into the future. Antimatter production research has been going on for decades. However, this research comes at a price. An antimatter war is started after a minor border skirmish causes stockpiles of antimatter missiles to explode, resulting in Earth becoming completely devastated. In the midst of all the chaos, a mysterious, previously unknown evil dictator named Nikolai I. Zorgeuf, along with 3 of his closest military followers; Commander Bill Garland, Commander Joan Rile, and High Commander Liften Schwaltz, takes control of the entire planet and promises that Earth will be rebuilt where people will be safe under his power. A small, but powerful group of rebels are not convinced, and so declare war on Zorguef and his 3 allies to free the Earth from his grasp.