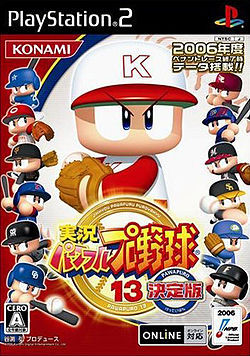 Jikkyou Powerful Pro Baseball is a series of Japanese baseball arcade-simulation games published by Konami and developed by Powerpro Production (previously known as Diamond Head) ever since 1994. It is one of the most long running sport series with a lot of spinoffs in Japan, though English-speaking countries tend to know the series by its Americanized spinoff series MLB Power Pros.

The series is known for its unique character designs. They're short, small, have a big head, no nose, no mouth and no legs. Another feature the series is famous for is the unique "Success Mode", which is a game mode where you create your own character, advance through a story mode, develop his baseball stats and finally get to use the character freely after you've completed the Success Mode. Two of four MLB Power Pros series are the only of series that have been translated into English from the results that Japanese baseball players were able to MLB league, thus the proper licensing and uses of the Major League Baseball elements. The rest of the series is associated with the Nippon Professional Baseball league (NPB), resulting in no localization outside Japan.

Since 1999 a sister series called Powerful Pro-kun Pocket was developed for Nintendo's portable systems. It lasted until 2014 after 14 main installments and a spinoff. Its stories were darker and more fantasy-oriented, especially in the case of its alternate "Inner Success" story modes, which frequently had little to do with Baseball and featured turn-based RPG mechanics.

It has appeared in two Konami crossovers, Konami Krazy Racers and DreamMix TV World Fighters. Since 2020, with Konami entering e-Sports scene, eBaseball has been one of Konami's flagship E-Sports titles alongside eFootball Winning Eleven/Pro Evolution Soccer (though eBaseball does not have a PC version unlike Konami's other e-Sports titles).

The trope used in this series are: