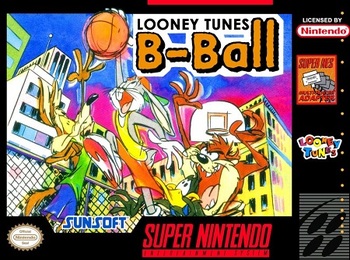 Roughly a year before Michael Jordan and the Looney Tunes joined forces, the "Tune Squad" had it's own basketball game, albeit with much lower stakes than what the movie had.

Looney Tunes B-Ball (Known as Looney Tunes Basketball in PAL regions) is the result of taking the gameplay of NBA Jam and adding both the characters and trademark slapstick of the Looney Tunes franchise, courtesy of Sunsoft and Sculpted Entertainment, in 1995. Though the roster is noticeably thin compared to Jam (only Bugs Bunny, Daffy Duck, Elmer Fudd, Yosemite Sam, Sylvester, Wile E. Coyote, Taz, and Marvin the Martian are playable), it makes up for it by incorporating tons of signature Looney Tunes humor during gameplay, with lots of Mythology Gags abound.

By collecting gems on the court that pop up during gameplay, you can spend them to use special offensive and defensive abilities; such as Bugs dressing in drag to distract opponents, Marvin zapping opponents with his disintegration gun, or a long range 3-point shot that can be used from back court. Also unique to B-Ball is the "Vegas" ability, which can grant a team special bonuses depending on the slots results, and a pre-game "Wacky Meter", which as the name implies, lets players ramp the slapstick Up to Eleven, or skew gameplay closer to a traditional NBA Jam match.

Despite favorable reception and sales, this was the last game Sunsoft's American branch published before shuttering completely due to circumstances beyond their control. As a result, B-Ball, and an unrelated Speedy Gonzales game still in development, were moved over to Acclaim when Sunsoft sold them the game rights to the Looney Tunes franchise. Not-so-coincidentally, Sculpted Entertainment, B-Ball's developer, would also be bought by Acclaim around the same time, and developed both the Space Jam tie-in game and NBA Jam Extreme the next year, both of which used this game's engine.