The baseball dudes who star in each game. Usually an energetic and kind highschool student or adult pro ballplayer who's obssessed with Baseball. The design was created by Fujioka Kenji. 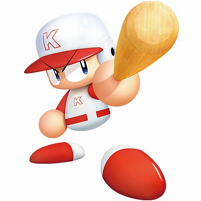 The typical Pawapuro-kun with a white K on the hat. Started frowning in the boxart for 7 and hasn't stopped since.

From the Power Pro games 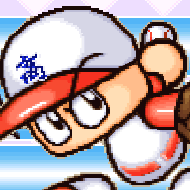 From the Power Pocket games 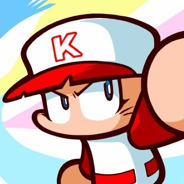 The original Pocket protagonist and the only one who's seen in a second game. Leads a lowly high-school Baseball team to victory, but his life turns to hell afterwards...

A man who attempts to lead the miserable Drill Moglars team to victory.

A boy who accidentally triggers a curse that makes his friends vanish from reality and from people's memories.

A warrior from a medieval fantasy world.

A popular ballplayer who crashed face-first into another guy and finds himself mind-swapped into his body.

A ninja from the Sengoku period who must pick one of three factions in an ongoing territory war in Japan.

A time traveller who's looking for a criminal who caused the Wakura factory and its divisions to get bankrupted in the future. Gets defeated by the Great Empire Killers team without even confronting the time criminal and is sent to the Happiness Island, where another adventure unfolds.

A ballplayer who finds his school invaded by crazy superheroes.

A "detective adventurer" who solved mysteries and looked for treasure in Japan's Taisho and early Showa eras.

A boy who made a deal with the Baseball God for the ressurection of his father.

A secret agent from the CCR Organization who is sent to infiltrate a Baseball team which is said to host criminal androids. Had no idea of how to play Baseball upon starting his mission.

A wanderer who comes to resolve a baseball-related incident on a shopping district.

A space captain who resists a corrupt galactic goverment.

A boy who enrolls into a martial arts temple by accident.

A boy who enrolls on a very strict high school.

A tank-riding adventurer who must join one of three factions and defeat the others in a war for wish-granting stones... in a steampunk world.

This guy found a genie in a lamp one day, made his three wishes, and then found the genie would curse him to death if he did not achieve his goals all by himself.

A student whose city suffers something of a Zombie Apocalypse due to an alien invasion.

The furious protagonist from the Guppies mini scenario who just briefly appears in its opening scene.

A troubled youth who must solve the mystery of a Haunted Technology being who has kidnapped several people including his friends.

An alchemist who works for the Silver Shield secret society.

After suffering severe injuries in an accident and being laid off his team, this kid must climb his way back to the top.

A novice sea captain who's looking for a legendary treasure.

A boy who's been raised to be the ultimate ballplayer. Finds out he has mysterious "Magic Ball" energy powers, and that suddenly other kids are mastering them as well.

A boy who fell into an alternate feudal Japan world where everyone plays tabletop Baseball.

The protagonist from the Koshien Assault scenario.
From the MLB Power Pros games

Starting from Power Pro 4 we are introduced to a nerdy guy called Akio who's good friends with each protagonist. The Pocket sister series then brought in several identical half-brothers from his family, some of which are more mischievous than others. 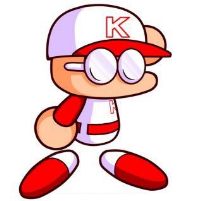 You can tell this is Akio because in comparison to his half-brothers he has No Defining Physical Characteristics.
From the Power Pro games 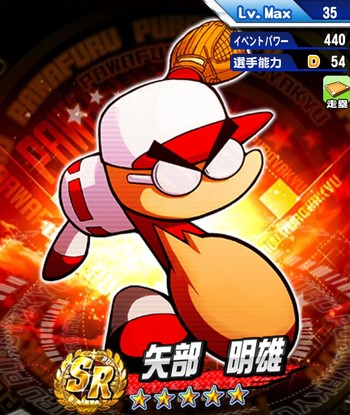 The original eyeglass friend since Power Pro 4.
From the Power Pocket games 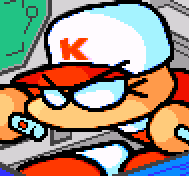 Hero 1.3's best friend who turns bad after dying during their rescue of Satomi from the Propeller Team's base and being restored to life as a cyborg.

He has an alternate universe self who appears as the Big Bad of most Inner Success scenarios. This other Kameda owns a Gundar Golem with a space-time travel device, though he is unable to revisit the same time period of a setting once he leaves it. 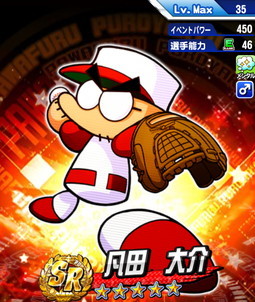 A robot designed after Kameda who's the leader of the Blood Butterfly organization.

One of the martial arts students at the Shōshin Temple. Hopes to become a famous toy critic in the future.

The youngest glassy guy.
From the MLB Power Pros games

The usual glassy friend, but American. A teammate of the first MLB Hero and a childhood friend of the second.