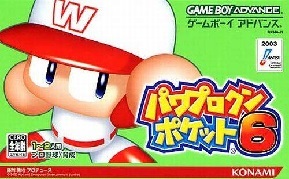 Power Pro-kun Pocket 6 is a 2003 Baseball simulator + visual novel developed by Diamond Head and published by Konami for the Game Boy Advance. The game's Baseball simulator engine has been visibly modified, and both of its Success modes are standard visual novels. The second one, in fact, is the one of the few in the series that's connected to the first one. This installment also introduced the "Power Point" currency you can use to unlock content and items for New Game+.

This game's engine was later used for a Video Game Remake of the first and second installments.

A time traveller comes from the future on a mission to find the time criminal whose alterations to the timeline have caused the important Wakura tech factory to become bankrupt. After getting hired, "Hero 6" must investigate his co-workers and help them win in Baseball matches against other corporations...

...However, the Wakura team loses a match against the Great Empire Killers and is bankrupted. Hero 6 fails to even confront the time criminal. The plot goes Off the Rails as Hero 6 is sent to the Blood Butterfly Army's camp as a slave to Work Off the Debt. And it's no "army boot camp" matter — they're flat out nazi-esque arms traffickers who are performing human experiments regarding the eponymous "happiness herbs" drugs. Can Hero 6 work there for 100 days without getting freaking executed? Will he stir a rebellion or will he instead join their ranks?