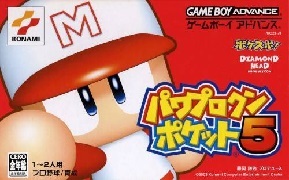 Power Pro-kun Pocket 5 is a 2003 Baseball simulator + visual novel + turn-based RPG developed by Diamond Head and published by Konami for the Game Boy Advance. It introduced the My Pennant mode, in which you can enter your custom characters to see if you can win an entire year-long season without getting fired.

There's also a training mode for checking out the controls and the performance of each character. In the Outer Success for this game as well as some of the later ones, it is used as a mandatory minigame for earning reputation.

Yusaku Kosugi is a star player who just beat the Oogami Moles team. While dashing away from reporters, he crashes face-first into a disgruntled player from Moles, "Hero 5". When he comes to, Yusaku finds the crash somehow switched their bodies, and that Hero 5 has no intention of setting things right. Now in a terribly unfit body and surrounded by people he doesn't know, can Yusaku make his way to the top again?

In the Sengoku period, the Daimyo's daughter Norika claims she really wants a Baseball Doll. Ninjas from all over the country scramble to eradicate each other and make the perfect Doll to earn Norika's favour.