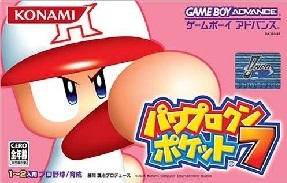 The One With… Sentai fascism.
Advertisement:

Power Pro-kun Pocket 7 is a 2004 Baseball simulator + dating sim + turn-based RPG developed by Diamond Head and published by Konami for the Game Boy Advance. The story for Outer Success was made a little more complicated and the systems for the RPG scenario were changed or simplified.

It was the first Pawapoke to get an OST CD with a vocal version of one of its most notable songs. After this game the series migrated to the Nintendo DS, but the spinoff Pawapoke Dash was still developed for the GBA.

In 2021, the game's Koshien Hero scenario got loosely adapted into Live Powerful Pro Baseball Mobile as Hanamaru Highschool with plot points and characters from other installments in the Pocket series.

After a painful string of defeats, "Hero 7" from Hanamaru High School can only wish for a miracle as his team is about to lose yet again. Luckily enough, a sentai hero called Red suddenly jumps in and scores a Home Run for them. The next day, Red comes to Hanamaru as a transfer student and quickly becomes the school's star, but Hero 7 can't help but feel something's off when more and more Pokerangers begin turning up, each replacing a member of his Baseball club. What is the true nature of those "heroes"?

A treasure-hunting detective must go on various adventures around Japan and prepare for a Baseball Doll competition in 200 days to pay off a large debt.
Advertisement: