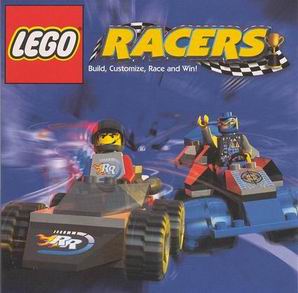 LEGO Racers consists of games with, as the title suggests, LEGO people in LEGO cars racing each other.

A Mascot Racer similar to the Mario Kart series, you can use weapons to help you. In this case you collect colored blocks for different types of power-ups, and collect white blocks to upgrade power-ups. Red are projectiles-like weapons, yellow are traps, blue blocks are defensive shields, and green blocks are speed boosts.

LEGO Racers also contains a build mode, for which you can build your own characters and cars. As you defeat more racers, you gain more pieces to use to make more characters and vehicles.

Along with introducing some old LEGO Set characters like Johnny Thunder, this is where Rocket Racer comes from - he claims to be the best racer and you must work your way up to beat him.

It received a sequel, in which Rocket Racer, after his defeat in the first game, has once again worked his way to the top and you have to defeat him again. On the planet Xalax.