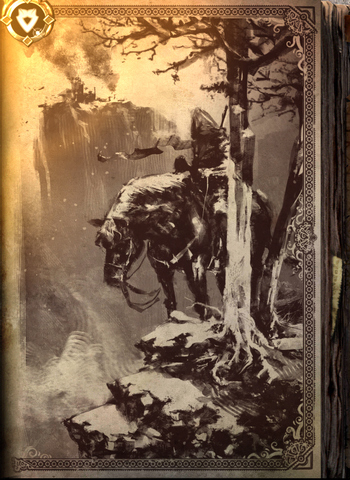 For many centuries, the Kai Lords defended their kingdom of Sommerlund from the Darklords of Helgedad. Many battles were fought and won by the Kai, but finally came their demise. Three years ago, the monastery of your order was attacked by the armies of the Dark Lords. The Kai were destroyed, you were the only one who survived the final battle. All seemed loss, but you retrieved the Sommerswerd, the one weapon that can slay a Darklord of Helgedad. You slew Zagarna, the Darklord leader and saved your kingdom from destruction. Now the lesser Darklords hunger to take their revenge. It fall to you, the lask Kai Lord of Summerlund, to crush their evil scheme once more.
— Intro
Advertisement:

A video-game spin-off of the Lone Wolf series of Gamebooks by Joe Dever. The game combines the Gamebook genre of written narrative and multiple choice puzzle with a combat system using Combatant Cooldown System and Quick Time Events. The game was released in an Episodic Game format for IOS and Android, and in a single release for Steam.

The game is set in the Kai era, three years after the Darklords invaded.* Putting it between books 3 and 4 chronologically. You play once more as Lone Wolf, last of the Kai lords, and the game is set in the land he was given liegedom over for defeating the invasion. News soon reaches Lone Wolf that a village named Rockstarn under his protection has been attacked, and Lone Wolf sets out to rescue the survivors and find the reason behind the attack.

The story is penned by Joe Dever himself, and written exclusively for the videogame, not an adaptation of any book. Dever himself also voices the intro.