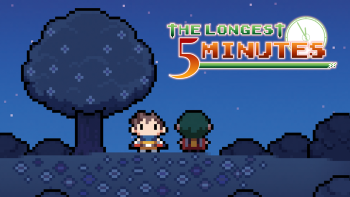 The Longest Five Minutes is an Eastern RPG developed by SYUPRO-DX, and published by Nippon Ichi. The game was originally released on the Play Station Vita in Japan, but its international release (February 13, 2018 in North America, and February 16, 2018 in Europe) was expanded to also include the Nintendo Switch and PC (via Steam).
Advertisement:

Finally, after a long and arduous journey, it is time for the hero and his allies to defeat the Demon King. There's just one problem: the hero has lost every memory about how he got here. During the five-minute battle that follows, the words of both his allies and his foe reawaken his memories, which he must relive in order to vanquish the evil before him.

That's right! I remember the Tropes!