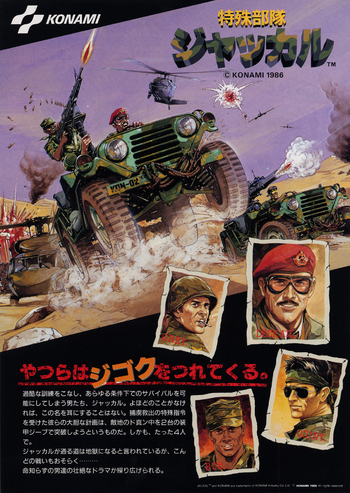 They're bringing hell with them.
Your brothers-in-arms are hostages behind enemy lines, and you're their only hope for freedom. But the firepower you'll face to rescue them is awesome. Rescue the POWs in the buildings. You'll need a pocket full of miracles, and the ferocity of a wild Jackal.
From the attract sequence of the NES version.
Jackal (also known as Top Gunner in its American arcade release) is a top-view action shoot-'em-up where the player must fight into enemy territory while driving a jeep in order to rescue captured allies and transport them into a rescue chopper. It was originally released as an Arcade Game by Konami in 1986, followed by a home version released for the Nintendo Entertainment System in 1988. It was one of the many military-themed action games released by Konami during The '80s alongside
Advertisement:
Rush'n Attack, Contra and the original Metal Gear.

Like many obscure classic Konami games, Jackal was referenced in later Konami games such as Silent Scope and Contra Returns.