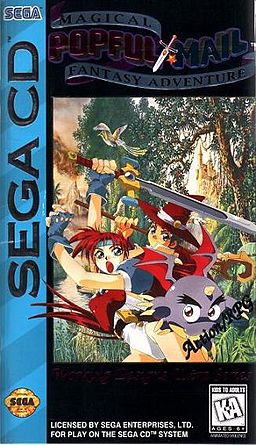 Popful Mail is a side-scrolling action-adventure game, originally made by Falcom (developers of the Ys series) for NEC's PC-88 home computer, and then ported to the PC-98, Sega CD and PC Engine CD systems. Working Designs worked on the localization for the North American Sega CD version. There's also a little-known Super Famicom version which is essentially a Reformulated Game due to the remixed area layouts and some plot structure differences, but it still recognizably contains the same overall story as other incarnations.
Advertisement:

It stars a charmingly inept elven bounty hunter named Popful Mail (think Lina Inverse with Pointy Ears), who's spent much of her adventuring life chasing after the notorious criminal Nuts Cracker. She manages to corner him, but is only able to retrieve Nuts' head (as his body runs away from her during their melee), which is practically worthless. Frustrated, she takes her trophy and wanders toward a town, where she learns of an even better bounty — 2,000,000 gold for the capture of an evil old wizard named Muttonhead.