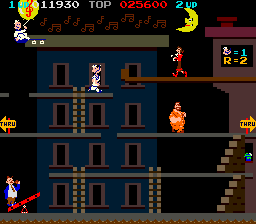 Popeye is an Arcade Game from 1982 by Shigeru Miyamoto and Genyo Takeda based on the namesake character. It was later ported to several consoles and computers. It is one of the few Licensed Games to have been made by Nintendo.

You play Popeye, trying to collect hearts, musical notes, or letters of the word "HELP" from Olive Oyl, who walks back and forth at the top of the screen and sends them floating down. Each of the three levels has four platforms, broken in places and connected by stairs or ladders. If a heart/note/letter reaches the bottom of the screen, it lands in water, and you have a limited time to get it before you lose a life. Collect them all and you advance to the next level. Unusually for a platform game, Popeye cannot jump, except in one corner of level 2, where Wimpy is standing on a seesaw.

Standing in your way are Bluto/Brutus (called Brutus here), the Sea Hag, and on level 3, her vulture Bernard. Brutus chases you around, trying to kill you with Collision Damage, and throws bottles at you. He can jump both up and down through platforms. The Sea Hag appears on the sides of the screen when you pick up something from Olive, and throws bottles at you. Once the game starts repeating, on level 1 and level 2 she also stands at the top of the screen throwing skulls. The vulture on level 3 has carried Olive to the top of a pirate ship's mast; hence the "HELP" letters. It flies across the screen swooping up and down. You can punch bottles, skulls, and the vulture.

Spinach is available once per level on the side of the screen, but it keeps teleporting to different platforms. This is the only way to deal with Brutus.

There is some interesting history here, in that a Popeye game is what Nintendo wanted to make when they made Donkey Kong. They couldn't get the license, so Miyamoto came up with a love triangle that mirrored the Popeye universe. The three characters became Mario, Donkey Kong, and Pauline. After Donkey Kong, they got the license, and did this. Popeye was designed by Miyamoto, and his style is easy to recognize here.

Assets from the Nintendo Entertainment System version were recycled for Popeye no Eigo Asobi, an Edutainment Game for teaching English to Japanese children.

, which translates to Popeye: The Tale of the Sea Hag, only released in Japan for the Super Famicom; a Game Boy title

; and Popeye: Rush For Spinach

by Namco for the Game Boy Advance, released in the US and Europe. Tropes below do not apply to any of these titles.