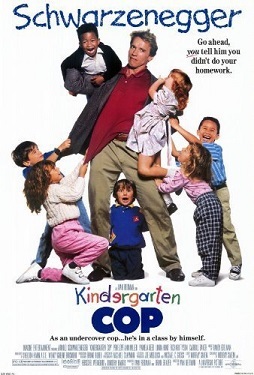 Kindergarten Cop is one of Arnold Schwarzenegger's earlier comedic roles, following his comedy debut in Twins under director Ivan Reitman, who also directed this film.

Arnold plays Detective John Kimble, a cop trying to put away drug dealer Cullen Crisp. Hoping to locate Crisp's estranged wife and son in order to draft them as witnesses, and having no information about them except the name of the school where the son goes, Kimble goes with his partner to find them. Initially it is his partner who is supposed to teach the kindergarten children with Kimble as the muscle, but when she gets a stomach flu on the journey, Kimble has to do it.

Hilarity Ensues when tough guy Arnold turns out to be completely unprepared to take on the challenge of babysitting five-year-olds. Meanwhile, Crisp gets released from prison and sets out to find his family...

While the film was not what everybody expected thanks to deceitful trailers, it helped to type-cast Arnold as an action-movie actor, and was a box office success, grossing over $90 million on a $11m budget, good for the top-10 box office of 1990.

It was followed by a direct-to-DVD sequel, Kindergarten Cop 2, in 2016, with Dolph Lundgren in the title role.

Stan Lee liked this film so much that it would serve as the inspiration for the 2021 animated series Stan Lee's Superhero Kindergarten, in which Arnold Schwarzenegger plays Arnold Armstrong, a kindergarten teacher.

What are your tropes, and what do they do?

You should probably rest after editing this page, Troper. Worst case, you could've gotten a tumor—
IT'S NOT A TUMOR! Not at all!

Detective John Kimble gives Zach's Father a taste of his own medicine for beating his kid.

Detective John Kimble gives Zach's Father a taste of his own medicine for beating his kid.